Arctic amplification is widely attributed to the sea-ice albedo feedback and the corresponding increase in absorbed solar radiation, yet an important, and underappreciated, contribution arises from the impact of the vertical structure of atmospheric warming on the Earth’s outgoing radiation. Since the Arctic temperature profile may be influenced by a number of processes, this raises questions about the physical mechanisms ultimately responsible for the so-called lapse rate feedback. Our research activities in this cluster focus on creative modeling experiments designed to disentangle atmosphere, ocean, and cryosphere impacts on high-latitude climate change, and novel statistical techniques capable of identifying causal mechanisms in any time series, observational or simulated. 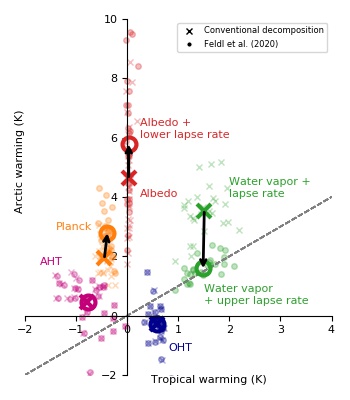 Arctic amplification of anthropogenic climate change is widely attributed to the sea-ice albedo feedback, with its attendant increase in absorbed solar radiation, and to the effect of the vertical structure of atmospheric warming on Earth’s outgoing longwave radiation. The latter lapse rate feedback is subject, at high latitudes, to a myriad of local and remote influences whose relative contributions remain unquantified. The distinct controls on the high-latitude lapse rate feedback are here partitioned into upper and lower contributions originating above and below a characteristic climatological isentropic surface that separates the high-latitude lower troposphere from the rest of the atmosphere. This decomposition clarifies how the positive high-latitude lapse rate feedback over polar oceans arises primarily as an atmospheric response to local sea ice loss and is... read more →

Projections of amplified climate change in the Arctic are attributed to positive feedbacks associated with the retreat of sea ice and changes in the lapse rate of the polar atmosphere. Here, a set of idealized aquaplanet experiments are performed to understand the coupling between high-latitude feedbacks, polar amplification, and the large-scale atmospheric circulation. Results are compared to CMIP5. Simulated climate responses are characterized by a wide range of polar amplification (from none to nearly 15-K warming, relative to the low latitudes) under CO2 quadrupling. Notably, the high-latitude lapse rate feedback varies in sign among the experiments. The aquaplanet simulation with the greatest polar amplification, representing a transition from perennial to ice-free conditions, exhibits a marked decrease in dry static energy flux by transient eddies. Partly... read more →