Since the 1970s, simulations of climate change forced by increased CO2 concentrations have predicted warming that is greatest in polar regions. This polar-amplified warming has been variously attributed to the ice-albedo feedback, associated with the retreat of reflective sea ice in summer; the lapse rate feedback, associated with vertically nonuniform atmospheric warming in winter; and changes in energy transport by atmospheric circulations. Uncertainty in projections of Arctic climate change arise in part from incomplete understanding of the interconnected nature of these processes, which we strive to disentangle through creative modeling experiments and novel statistical techniques.

This research is funded by the National Science Foundation under Award 1753034. 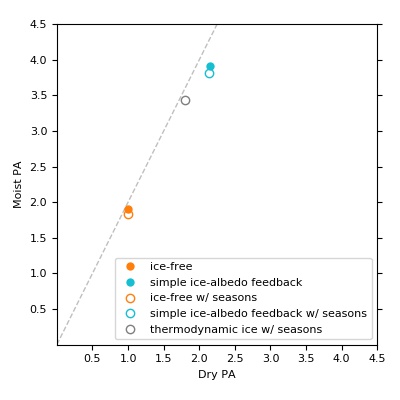 Polar amplification of climate change is simulated across models with various representations of local feedbacks and poleward energy transports. Yet uncertainty in attribution remains due to the interactive nature of the physical drivers and the different perspectives afforded by different diagnostic methods. Here, the role of sea-ice processes, moist energy transport, and the seasonal cycle of insolation are systematically isolated in two models, an energy balance model and an idealized general circulation model. Filling this gap in the modeling hierarchy reveals that, compared to a simple ice-albedo feedback (temperature-dependent surface albedo), the addition of thermodynamic-ice processes and the seasonal cycle of insolation profoundly affects seasonal polar warming. Climatologically limited-extent ice in the warm season permits only small increases in absorbed solar radiation, producing weak warming,... read more →

Arctic amplification (AA) is a coupled atmosphere-sea ice-ocean process. This understanding has evolved from the early concept of AA, as a consequence of snow-ice line progressions, through more than a century of research that has clarified the relevant processes and driving mechanisms of AA. The predictions made by early modeling studies, namely the fall/winter maximum, bottom-heavy structure, the prominence of surface albedo feedback, and the importance of stable stratification have withstood the scrutiny of multi-decadal observations and more complex models. Yet, the uncertainty in Arctic climate projections is larger than in any other region of the planet, making the assessment of high-impact, near-term regional changes difficult or impossible. Reducing this large spread in Arctic climate projections requires a quantitative process understanding. This manuscript aims to... read more → 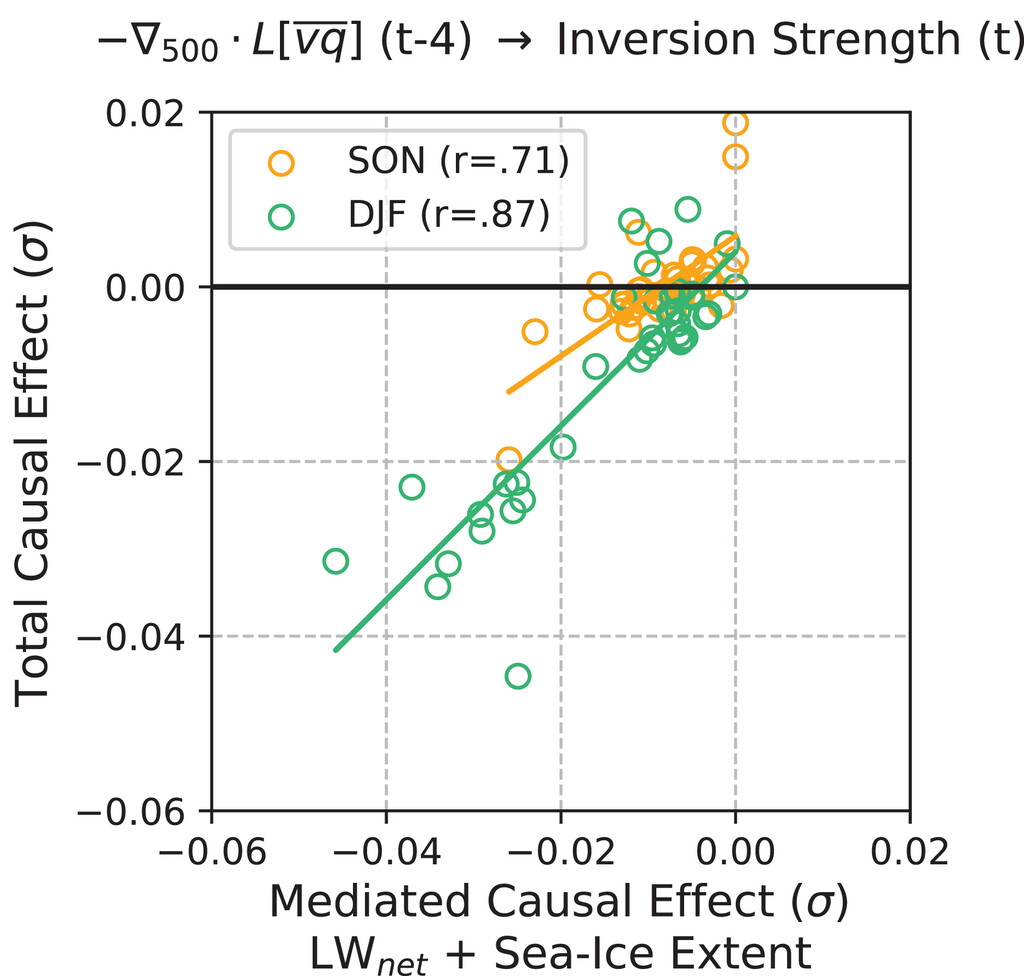 Arctic amplification of anthropogenic climate change is widely attributed to the sea-ice albedo feedback, with its attendant increase in absorbed solar radiation, and to the effect of the vertical structure of atmospheric warming on Earth’s outgoing longwave radiation. The latter lapse rate feedback is subject, at high latitudes, to a myriad of local and remote influences whose relative contributions remain unquantified. The distinct controls on the high-latitude lapse rate feedback are here partitioned into upper and lower contributions originating above and below a characteristic climatological isentropic surface that separates the high-latitude lower troposphere from the rest of the atmosphere. This decomposition clarifies how the positive high-latitude lapse rate feedback over polar oceans arises primarily as an atmospheric response to local sea ice loss and is... read more →